In the 1970s, I made a tube turkey call out of a plastic pill bottle with latex rubber over half of the bottle. I always had a deep passion and love of calling animals - any kind of animal. I was playing around with this pill bottle turkey call and got a goose sound out of it. So I bought thicker latex and began to work with the pill bottle to make a goose call, and I produced my first tube goose call.

In 1975, I replaced the pill bottle with wood and started making some goose calls out of wood. The man who was making the barrels for those wooden goose calls threw one in the garbage can. When I asked him, “Why did you throw that tube call away?” he said, “The walls of this tube are too thin, and it’s got a crack in it.” I took that call out of the garbage can and glued that crack the best I could. As I looked at that call, I started thinking of my dad, who was a bluegrass musician. He built his own fiddles out of very thin wood, because he said the sound was better if the wood was thinner. Dad could take a fiddle apart, tune it and put it back together. Dad also had a very good musical ear and could distinguish between a good sound and a bad sound. I guess I inherited some of that ability from him. I knew that the thin wood would resonate well and sound good. So, I used that throw-away wooden tube in the World Goose Calling Championship that I won.

I met up with a friend of mine who was a two-time world champion duck caller – Mike McLemore. He was a champion-of-champions duck caller. I blew my little pill bottle goose call for him, and Mike said, “That’s the best-sounding goose call I've ever heard. Why don’t you go to the World Champion Goose Calling Championship and call with it?” I asked Mike, “Where do they hold that contest?” “In eastern Maryland,” Mike replied. I kind of frowned and said, “That’s a long way from my home in Cadiz, Kentucky.” Then Mike said, “I'm going up there. You can ride with me.” So, I rode with Mike up to this waterfowl festival. I think Mike was emceeing the duck and goose calling championships. I won that championship with that pill bottle tube goose call in 1979.

After the contest, I met this young boy – I think his name was David Coleman - a goose guide in Maryland. He asked me, “Will you show me how to blow that tube call?” I told him sure. So, I taught him everything I had learned about the tube goose call. The following year in 1980, I went back to the World Goose Calling Championship to defend my title, and that young man beat me like a drum. The next 2 years he won that championship with that same tube call, and I heard that he won the World Goose Calling Championship this year with that same tube goose call.

Day 1: The Discovery and Promotion of the EZ Grunter Call for Deer with Harold Knight

Tomorrow: Harold Knight Grew Up With a Bow and Arrows

Harold Knight's Discovery of the EZ Grunter Call for Deer
Seventy-two-year-old Harold Knight and 70-year-old David Hale created one of the most successful game call companies in the nation when they founded Knight and Hale Game Calls. Early in their careers they became part of Mossy Oak and have been in the Mossy Oak family for 28 years.
Read More 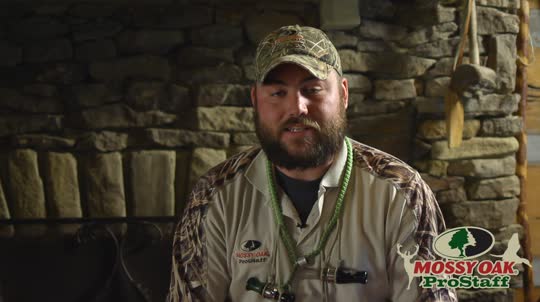 Goose Calling Tips
Mossy Oak ProStaff member Cory Dukehart is an avid waterfowl hunter. Cory shares some tips on how to use a goose call and make some of the basic sounds.
Watch Now

Harold Knight Grew Up With a Bow and Arrows
When you hear the words Knight and Hale, you automatically think of two bowhunters from Cadiz, Kentucky, who founded the Knight & Hale Game Call Company. But what most people don’t know is that originally David Hale was a farmer, and Harold Knight was a barber. These two men grew up during the evolution of the sport of bowhunting. Today, both men have harvested numbers of Pope and Young and Boone and Crockett bucks with
Read More

Harold Knight's Discovery of the EZ Grunter Call for Deer
Seventy-two-year-old Harold Knight and 70-year-old David Hale created one of the most successful game call companies in the nation when they founded Knight and Hale Game Calls. Early in their careers they became part of Mossy Oak and have been in the Mossy Oak family for 28 years.
Read More

Seven Different Species of Canada Geese - the Good and Bad News
In our zone, we have seven different species of Canada geese - Vancouver, Western, Lesser Canada Goose, Greater White-Fronted goose, Taverner, Dusky and Cackling. That’s the good news. But all these geese are the same color. The geese vary in size, bill length and chest color. The bad news is that you cannot shoot the Dusky Canada goose, since it’s protected in Oregon.
Read More

The Best Trees For Wildlife
Adding mast-producing trees for wildlife on your property will not be a “quick fix,” but in the long run will go a long way toward providing what critters need to not only survive but prosper.
Read More

Mossy Oak: The Camouflage of Conservation
As Gamekeepers, we believe that the earth and soil are things of beauty, something to be nurtured and seeded. We are firm believers that the more dirt that gets under your fingernails, the higher your spirits are lifted.
Read More

The Importance of Flexibility for Outdoorsmen & Outdoorswomen
Flexibility enhances mobility, posture and coordination. Including stretching in your offseason workouts ensures you hit the trails in great shape.
Read More

All About Trees: 10 Q&A with Expert Dudley Phelps
As a kid, I’d pick up tree seeds like acorns to look at them. I’ve been fascinated with it since I was really young. In general, I just like growing things.
Read More

5 Best, Breathable Hiking Boots for Warm Weather
The best hiking boots for warm weather are breathable and durable and should suit the terrain you’re planning to spend the most time in.
Read More

Smoked, Braised Crispy Duck
This duck recipe is totally worth the wait when you bite into the finished dish that is tender, crunchy and super flavorful.
Read More

Commitment to Excellence in Collegiate Bass Fishing
As Mossy Oak’s commitment to collegiate bass fishing has grown, the company has sponsored the University of Montevallo’s Outdoor Scholars Program in Montevallo, Alabama, which includes a group of 50-plus scholarship athletes who have risen to the first-place position in the Bass Pro Shop School of the Year competition presented by Abu Garcia for 2021.
Read More

Thermacell: Focus on the Bite, Not the Bugs
With 15-feet of mosquito protection, no harmful chemicals, and refills available, Thermacell has everything you could need for a comfortable day on the water, bug-bite and DEET-free.
Watch Now

How DEET Deteriorates Fishing Gear & Repels Fish
It’s no secret that DEET is harmful for the skin and body. But did you know that DEET can damage your fishing line, your waders, and your breathable fabrics as well?
Read More